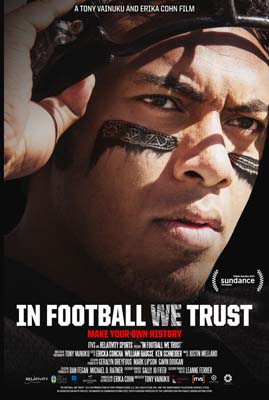 In Salt Lake City, Utah, four young Polynesian football players struggle to overcome gang violence, familial expectations, and near poverty as they enter the high-stakes world of college recruiting and the promise of playing in the NFL.

Tony Vainuku comes from a culture of Third World traditions and a family of athletes. After graduating from Westminster College  with a B.S. in Business Marketing, he founded Soulprofile Productions, which specializes in creative directing, video web ads, music production and other promos.

Erika Cohn directed Giant Steps,  a documentary about the reinstitution of art after the Khmer Rouge rule, which aired on PBS. In 2010, Erika associate produced the Frontline/American Experience series God in America, a six-part historical series on our nation’s relationship between religion and politics. Erika has received numerous accolades for her work, including a Director’s Guild of America award for her film When the Voices Fade, a narrative profile of the Lebanese-Israeli war of 2006, and recent admission into the CPB Producer’s Academy.  She currently has two films in development through Idle Wild Films, Inc.