Keeping my island in my mind: A Filipino perspective on Moana 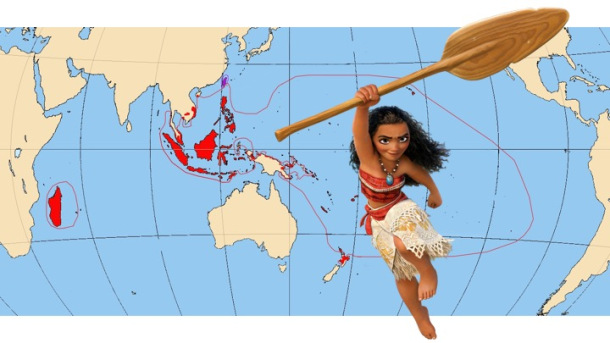 Moana and the Austronesian Migration. Image from The Daily Opium

I have watched Moana possibly five times now. It is probably my new favorite Disney film. Yes, it does have its problems and controversies, especially with the portrayal of Maui, one of the most important deities throughout the Pacific. Yes, it does borrow a lot of elements from older Disney films. Yes, its story isn’t as tight as it could be, and has a lot of plot holes. We can be mindful of all of the film’s shortcomings, and still be able to use parts of it that are meaningful to us. And this film certainly is meaningful not only to me, but to a lot of Filipinos all over the world.

Just the mere fact that the characters have beautifully brown, shapely bodies with curly hair and cute little noses is incredibly empowering. Colonial mentality is still deeply embedded in Filipino and Filipino American culture until today, and skin whitening soaps, diet pills, hair-straightening shampoos, and whatnot are still widely used. Our Filipino parents and relatives tell us not too play in the sun too long or we would get darker, pinch our noses in the vain hopes of erasing our Filipino-ness, and openly body-shame us. That’s why having characters on the big screen that celebrate their beautiful brown bodies instead of being ashamed of them is so important to Filipino kids today.

Moana also invites us to explore our own precolonial history and folklore. Heihei may have been Moana’s lovable, if dopey, chicken sidekick, but according to research back in 2014, his lineage may also provide clues as to the migration patterns of the early Austronesia. The ancestry of Polynesian chicken populations can actually be traced back to the Philippines. But it’s not just chickens we have in common;  many tribes in the Philippines identify the creator of the world as a trickster and shapeshifter, who pulled the islands out of the sea and gave fire to men. In Bontoc legend, he is called Lumawig, and yes, he does sound very similar to Maui. But it is not surprising; Polynesians and Filipinos, are, after all, part of the greatest human migration: the story of the Austronesians.

And it’s a migration that continues until today. This, perhaps, is the point the resonates the most with me. Like me, and many other Filipinos, Moana had to leave her comfortable, beautiful island in order to solve her family’s problems. She encounters people different from her who may belittle her and try to bring her down. She faces many hardships along the way, and learns that she has to break traditions and innovate in order to adapt. But she never forgets her island. That she’s doing all this for her island, and for her family.

There is an old Filipino proverb, which in Tagalog goes like this: “Ang hindi marunong lumingon sa pinanggalingan, ay hindi makakarating sa paroroonan.” Its meaning approximates what Maui tells Moana: “In order to know where you’re going, you need to know where you come from.” This is the reason why I always cry whenever I watch Moana. And this is why I think Moana resonates not only to Filipinos, but to everyone in the diaspora.

Moana will be playing as part of SAAFF’s free Movies at Hing Hay Park series on July 29. There will be live performances starting at 7:00pm, and the film starts at sundown.