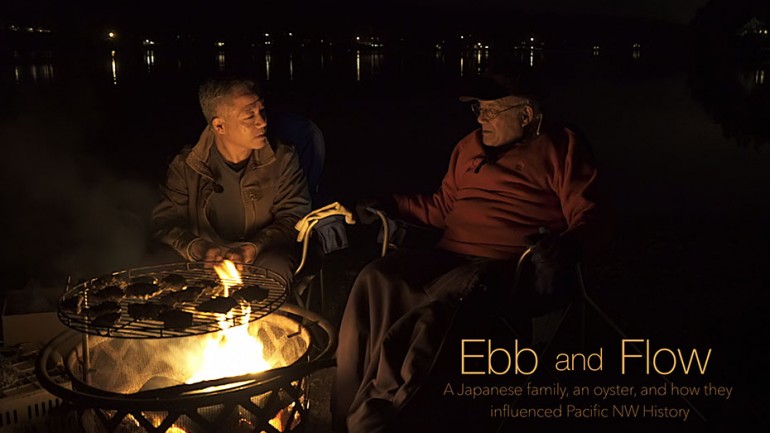 EBB AND FLOW follows ninety-three-year-old Jerry (Eiichi) Yamashita’s recounting of the family history to his son Patrick as they cook Japanese oysters around a campfire. Relying on Jerry’s memories and the help of rare archival footage, beginning with his father Masahide’s decision to immigrate to America from Japan in 1900, the Yamashitas’ journey spanning three generations of entrepreneurial spirit in the face of endless struggle and uncertainty, is revealed. Today Masahide is just beginning to be recognized for his very important pioneering efforts to save the shellfish industry from complete collapse in the 1930s with a Japanese oyster. The Yamashita family story is an inspiring one, but at the same time a cautionary tale about how a society can turn against its immigrants in challenging times, and is as relevant today as ever. Were it not for Masahide, today’s thriving shellfish farming industry with its legions of passionate oyster connoisseurs may never have come to pass in the United States.

“Ebb and Flow”… is the finest documentary on the story of a Japanese-American family I have seen to date.

Throughout Ms. Solomon’s previous career as a Restoration Biologist and Landscape Architect she was struck by the fact that much of the positive work being done on behalf of the environment went unnoticed by the general public.  Convinced that a better informed public would lead to a more engaged public, it seemed only natural to start what has become Leaping Frog Films (LFF).

Ebb and Flow might, at first glance, appear to be a departure from LFF’s previous work, with its primary focus being the Yamashita Family’s role in the early days of the Pacific Northwest shellfish farming industry.  However, as things unfold it becomes increasingly clear that theirs is a story intimately tied to the environment and an inspiring example of Leaping Frog Films’ continuing mission to bring to audiences stories that encourage us to make that crucial connection between ourselves and the Natural World.