TO DIE OR TO DREAM 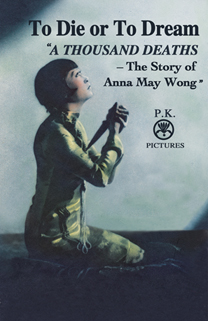 Chinese American actress Anna May Wong is caught in a dark alternate celluloid reality. She relives her cinematic past over and over while deciding how she wants to be portrayed as an actress and a person.

Peilin Kuo is a Taiwanese filmmaker based in New York. After graduating with a drama degree in her native land, she worked for a production company in Taipei which made music videos, commercials, and television programs. Her first short film Everyday won the “Someone to Watch 2005” award from the CineWomen NY and was broadcast by PBS “Reel New York” in 2007. Her many short films have been screened around the world including  the Cannes Film Festival ShortFilm Corner and Sundance Film Festival. She has also won the “Golden Palm” award from the Mexico Internation Film Festival. Peilin is currently in production for her first feature film, A Thousand Deaths, a biopic about the first Chinese American star Anna May Wong (1905-1961).