IN SEARCH OF AMERICA, INSHALLAH 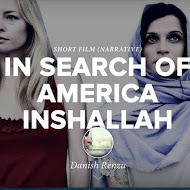 A dependent Pakistani housewife comes to America to find her husband, but instead is forced to find her emancipation.

Danish Renzu is a director/producer/screenwriter based in Los Angeles.  His feature-length script Winters of Kashmir is currently in development. His short film IN SEARCH OF AMERICA, INSHALLAH was selected for the prestigious Cannes Film Festival – Short Film Corner 2015 and Maryland International Film Festival to name just a couple of its many accolades. Danish Renzu also holds a Bachelors of Science in Electrical Engineering from University of California Los Angeles and has worked as an engineer in the field of telecommunications for about five years in Los Angeles.