GIAP’S LAST DAY AT THE IRONING BOARD FACTORY 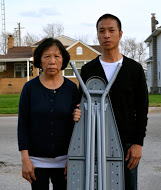 In Seymour, Indiana, population 17,000, Giap Thi Nguyen prepares for her final day of work at the last ironing board factory in America. As her American-born son Tony documents this moment, he discovers more about his mother, and where he came from, than he could ever have imagined.

Tony Nguyen made his directorial debut with Enforcing The Silence, a 2011 feature documentary about the unsolved murder of Lam Duong, the first Vietnamese American reportedly assassinated in the United States. He co-authored a profile on Lam Duong for 101 Changemakers: Rebels and Radicals Who Changed US History (Haymarket Books), a 2012 book that offers a “people’s history” of the individuals who have shaped our country.