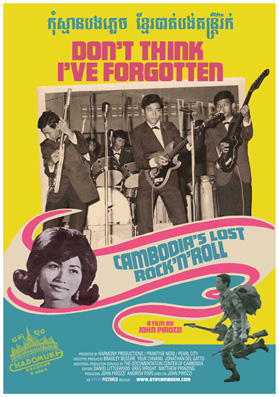 During the ’60s and early ’70s, a new music scene emerged in Cambodia that took Western rock and roll and stood it on its head — creating a sound like no other. But this artistic movement, and its artists, were nearly wiped out when the Khmer Rouge rose to power. This film is a celebration of the incredible music that came from Cambodia and explores how important it is to Cambodian culture both past and present.

Co-Presented By: Kollaboration and Rajana Society

John Pirozzi is a director, cinematographer and camera operator who has worked on such films as Boys Don’t Cry and Pitch Perfect 2. DON’T THINK I’VE FORGOTTEN: CAMBODIA’S LOST ROCK AND ROLL is the second documentary feature he has directed.