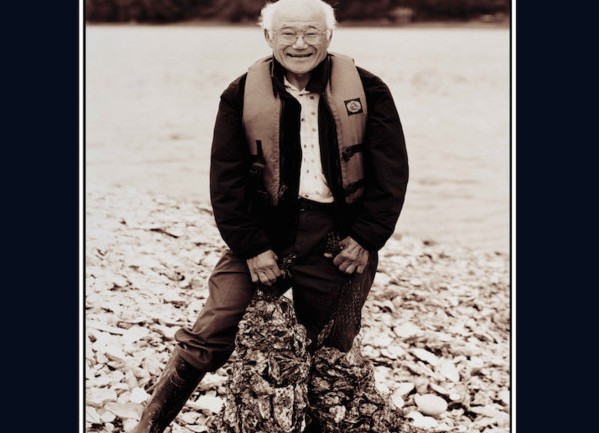 EBB and FLOW follows ninety-three-year-old Jerry (Eiichi) Yamashita’s recounting of the family history to his son Patrick. Relying on Jerry’s memories and the help of rare archival footage, beginning with his father Masahide’s decision to immigrate to America in 1900 in pursuit of opportunity, the Yamashitas’ journey spanning three generations of entrepreneurial spirit in the face of struggle and uncertainty, is revealed. Today the elder Yamashita is beginning to be recognized for his very important pioneering efforts to save the shellfish industry from collapse in the 1930s with a Japanese Oyster. The Yamashitas’ family story is an inspiring one, and a cautionary tale about how a society can turn against its immigrants in challenging times, and is as relevant today as ever. Were it not for Masahide, legions of passionate oyster connoisseurs, a thriving shellfish farming industry, may never have come to pass in the United States.

Shelly Solomon is a biologist, licensed landscape architect, water quality restoration specialist and an environmental filmmaker, with many years experience in resource and environmental planning, design, and compliance. This includes numerous articles that have appeared in worldwide publications about her unique work in restoring aquatic freshwater environments.

Throughout Ms. Solomon’s career she has been struck by the fact that much of the positive work being done by both government agencies and private groups in the environmental field, has gone unnoticed.

It seemed only natural to her that a better-informed public would lead to a more engaged public. Ms. Solomon started Leaping Frog Films to “Get the Word Out”, and has been encouraged by the response. Her films are aimed at increasing awareness and encouraging community involvement and volunteerism.

Ms. Solomon has made films for Washington state non-profit environmental groups and her work has been shown in numerous film festivals statewide.